Videos from Game 1 of 2015 World Series ... Rediscovered on my Phone Today #Royals 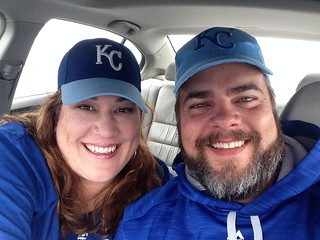 Carrie and I had the opportunity to attend Game 1 of the World Series on October 27, 2015.  Of course, we were there to cheer on the Kansas City Royals!

We did some tailgating in the parking lot prior to the game.  It was raining steadily as we sat in the parking lot.  We had purchased the tickets the day before when Carrie saw them advertised on StubHub for cheap.  It was not planned in anyway.  What a great night though we had!

We wore our ponchos into the game as it was raining steadily while in the parking lot and prior to the game.  Just about the time first pitch was supposed to happen, it did stop raining.  We made it to our seats which happened to be our favorite area to sit.  We love sitting in left field by the fountains. The seats are roomy and we are close to the beer!

During the game, I broadcast via Periscope and forgot until today that I had recorded those clips to my phone too.  We got excited last week with the re-signing of Alex Gordon and after looking through my phone for pictures/videos, I came across these and wanted to share them too.

The first video is from before the first pitch.  Everyone is ready and #TheK is packed! We meet the two guys next to us which were a lot of fun. One was a manager of Johnny's West in KC and the other was the bartender for Johnny's West.  Could not have asked for better guys to sit next to for a game let alone my first ever World Series game.  It is rather long at 12 minutes.  I also did not realize that with Periscope that I could shoot it wide screen until late in the second time shooting a video.


Bottom of the 9th inning and Alex Gordon hits a home run that sends us to extra innings. It starts off with Salvy at bat. This video is a little over seven minutes long. When Gordon hits that home run, we all go crazy! There were high fives everywhere... hugs....  I realized after watching this whole clip that at about the six minute mark when someone on Periscope said to go wide screen, it does not change when I posted it.  Oh well, you can still hear us yelling and the plays. "Enjoy the rest of the game" was my last comment in the video and little did we know it would go on a while after that... Fun night!

I am not going to apologize for my screaming during the videos.  That was something new that I started toward the end of the regular season.  Trying to throw off the opposing team.  Plus, I feel like it is good luck, so I keep doing it for other sports too.

The Royals ended up winning the World Series... in case you did not know...  Carrie and I only made it to the first game.  The rest we watched from my lucky chair where I yelled, screamed, and cheered for the Royals.  Looking forward to the 2016 to start and it is good to hear and read about contracts and new additions to the Royals. #ForeverRoyal is right!  I know I have been a fan since I was little and so fun to see the #Royals the past past and last year making it to the World Series.

Sometime this spring, Carrie and I will be traveling with brother-in-law Greg and his girlfriend Erin to watch minor league games in Arkansas.  We are all looking forward to that and hopefully we will see some up and comers that will soon be playing for the Royals.