Old iPhone 5 and Wanting the Newest Features... Why Not? 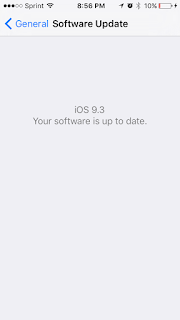 Don't you love it how technology tries to keep you "current"?  Well, more accurately put, the companies that produce the technology that we (I) like to use keep us current by forcing us to upgrade our phones, computers, cars, etc.  Just so we can get the new gadgets, new features, or just look "cool".

OK, I admit, I have an iPhone 5 which at this point is over three years old.  In terms of a phone, it is old.  A friend of mine just recently upgraded their iPhone 4 to the iPhone 6.  I am not that bad, but it does make me frustrated when my iPhone 5 (released September 21, 2012) can no longer do the fancy new features that are being produced for the "new" phones.

Case in point, my phone will not do the WiFi calling nor will it do the newly published iOS 9.3 feature of Night Shift which was released earlier this week.  So, I have the new operating system and I have been providing feedback for likes, dislikes, and suggestions for features, but my iPhone 5 will not do the new cool feature.  What's the point of allowing me to test my "old" phone with the beta software if the cool new feature will not work?

I have been part of the iOS public beta program since it was released.  I have the Mac OS beta installed too along with the iPhone beta.  Overall, I have enjoyed the experience.  I got tired of reporting that the phone app on the iPhone with the beta software is slow or crashes.  I think I have reported this issue every other time the beta has released.  Once again with 9.3 I am seeing the slowness with the phone app.  It either takes forever to change from contact, keypad, or voicemail or simply crashes back to the home screen.  I provide the feedback and the next release it is fixed.  This makes me wonder if it is because I am running an old iPhone 5 and it works great in iPhone 6 or 6 Plus, but who knows.  It keeps happening to my old phone.

I still remember when I was a BlackBerry fan.  I really enjoyed the Blackberry!  Well, more appropriately the BlackBerry 8330.  It was probably my favorite phone and never thought I could start using a phone without a keyboard.  The only frustration with that phone (BlackBerry) was that not a lot of people were using it, thus, there were hardly any apps for the phone that I could utilize.  The funny thing now is that with my iPhone, I use a core set of apps.  When I could not get those other cool apps for the BlackBerry, I jumped ship to get the cool new phone.

The core set of apps that I use now include email, Twitter, browser, calendar, FaceBook, fantasy sports, and a few other odds and ends.  Probably all apps that could easily have been done back in the day on a BlackBerry.

Back to my current phone of iPhone 5....  It is over three years old.  It is an old phone by any standards.  I plan to keep it at least until iPhone 7 which is due to be out in September 2016.  I am sure I will continue to test and complain about future iOS beta installations.  I will continue to complain about the horrible battery life my phone maintains (i.e. it dies with anywhere from 5 - 10% battery life).

The Night Shift feature released in iOS 9.3 public beta sounded perfect.  I have a bad habit of as soon as I wake up I grab my phone to check email, Twitter (see previous post), and a glance at FaceBook.  Even though I have auto dim set on my phone, the screen is usually so bright that I can barely look at the screen without my eyes watering.  It does not matter whether it is 3 am or 6:30 am when I wake and grab my phone to see what has come through since I was sleeping, I still am drawn to the phone to check what was happening.  Not the best habit, but so far I have kept from responding to email or Tweets at those odd times.

Anyway, because of my old phone and the fact that Apple decided not to release the Night Shift feature to anything less than a iPhone 5s, I miss out on this new feature.  Granted, as some friends said, this is likely because the iPhone 5 is unable to handle this feature and I agree, but I feel like I am missing out with this old phone.