OK, so, this will start the process of me blogging again. I enjoyed it so much when I was doing it on a regular basis. I got into somewhat of a rut just posting about sports. While that will probably play into a lot of what I post about, I do plan on posting on a variety of other topics as well.

The last time I posted anything of content was Sunday, April 26. It was the weekend after the Spring Faculty/Staff golf tourney. What a great time! So much time and things have passed since the April day. I will try to recount some of those items in this long over do update.

The faculty/staff tournament back in April helped to kick off me playing golf. I had planned to play a lot of golf over the Summer and I feel good about the amount of golf I have played. July was the month I played the most golf. One week right before my birthday, I played 36 on one day, 27 on another, and 18 on one day. It as great!

I have also taken a lot of golf lessons. I received golf lessons from the Shirrons' last Christmas and I started to use those in June. I was having a problem with my right wrist hurting when I would play, but I took a lesson with Joey at the club and he helped me to the over swing I was doing and instead not take the club back as far. This helped my wrist a great deal. Now, I have having problems with my right elbow. I know, odd! So, I scheduled another lesson for September 1 with Joey for another lesson. He is going to watch my swing to see if he can figure out why my elbow would be hurting. It hurts to the point where after playing golf I cannot open doors, lift a glass of water, etc. This goes on for days and at this point is preventing me from playing much golf. Still, I love the game, the process, and the experience of playing a round of golf.

The Summer also brought the start of Men's League at Shawnee Country Club. I managed to put a team together for Men's League this year. It was a lot of fun and September 3 is the last day for the league. We did not win, but we had a lot of fun! It is so much fun playing each Wednesday with a different group of guys, drinking beer, talking, and then eating dinner afterwards. The experience is great and I encourage it for anyone. The women's group has been trying to get Carrie to play for two years, but Carrie still needs to get clubs and learn the game. I think she would enjoy it just as I do if given the chance.

This is our third year of belonging to Shawnee Country Club (SCC). For two years, my handicap has been above the mens maximum handicap, so I had a 37.7L handicap. Ouch! The "L" indicates that it is above the mens maximum handicap and it is a local handicap. Well, finally, after three years I am finally below the maximum and I am at 33.9. Ah, much better! 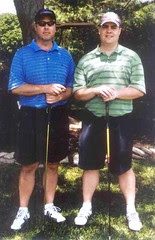 June was a fun month playing golf with my brother Tim. We had a great time playing in the SCC Member Guest Tournament. Tim and Jennifer stayed at our house for the weekend. We had a great time! While Tim and I did not win, we did have a good time! We smoked cigars just about every day (and night). We had a lot of beers! We also had a lot of good conversation! I plan to do it again next year. It was just good to have my big bro staying with me at my house. It was great to be able to get up and go to the golf course with my brother to play golf and know that all we would be doing for three days was play golf and be together. While Tim and I were playing golf, Carrie and Jennifer were able to spend time together too. They had fun shopping, going to lunch, and just lounging around the house doing nothing. We all had a fun time the last night, Saturday, with dancing and a full dinner. SCC did a great job with the event. It as my first of many and I was already planning at the end of the week to do it again next year. Good times!

July 4 weekend found us over at Robin and Scotts'. We had a great July 4 weekend. It was nice and long with the forth falling on a Friday. We actually saw someone light a firework in their hand and set it off. Later, Mike D, had to go to the emergency room to see if he fingers were broken. Nah, they were just badly bruised and still bleeding. The best part of the night was watching Scott and Carrie dance in the fireworks.

I am jumping around a bit, but after so much time what can you expect? We move into August and it gets extremely busy at work. Move in week for residential living, upgrade for MyWashburn, and working with new faculty, staff, and students as they start to use Washburn systems. It is now about to turn to September and things remain busy at work. The kind of busy where the day is ending and it feels like it just began. The types of days where you have to make it a point to get your lunch in or you will miss it completely. The only good thing is that the days pass by so fast you barely realize you have been slammed the whole day.

Turning to September also takes us into the start of college and NFL football. The Washburn Ichabods played their first game of the season yesterday. They played the Colorado School of Mines and kicked their butt 27 - 7. Good way to start the season. Carrie and I will miss the first home game next weekend as we will be down in Arkansas to visit family that we are meeting down there. We will make it to the September 12 game and it should be fun as it is a night game.

Well, I realized I forgot to mention anything that happened in May. I do not recall at this time what happened that month. If I happen to think of anything, I will be sure to post it. Other than that, rest assured that I am going to try and post a update at least once a week. I am going to set a reminder task so I get reminded of it each week.

Now, we begin the slow descent into the winter months. What a odd Summer it has been. We went to the lake on Friday and about froze in the water. Odd! We had a fun time and hope to be able to get out to the lake once more before winter hits.

Until I write again... Have a great week and I will be back on next week!

Hello... I know it has been a while. Well, I am going to try to start posting more. About anything and everything. Not just sports! :). Mobile posts are set.
No comments: Links to this post
Email ThisBlogThis!Share to TwitterShare to FacebookShare to Pinterest
Labels: 2009, sms
Newer Posts Older Posts Home
Subscribe to: Posts (Atom)