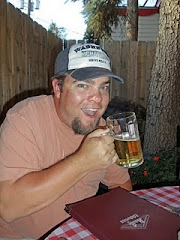 This is month six on my life change style. Since returning from Colorado (see Trip to Colorado Good Times), I have decided to give up any type of alcohol. Primarily this is because of the calories that alcohol has in it. Secondly, because when I drink beers, I want to eat afterwards or at least at some point after having a few beers. No, this is not a permnant life change as I LOVE beer. I am basically only giving up beers until the end of June. It is a experiment for myself to see if I can drop any more weight. I have been right around the same weight for the past 60 days. Goes up and down, but right around the same weight.

You might have noticed that I have not taken pictures (front or side) as I was doing initially. The main reason for no pictures is that I have been lazy about posting this on, or around, the 5 of each month. The other reason is that I have not noticed any changes in my physical appearance the past few times I did post pictures. So, part of the experiment is to see if giving up alcohol for a few weeks does anything drastic in terms of weight loss.

I have also been sticking to a strict diet. Staying under 1,860 calories a day. The weekends are typically the hardest time to try and stick to that calorie count. If I remember correctly, I have that calorie count set to try and lose two pounds per week. Well, after two months of sticking right around the same weight, I need something to change to kick it into the next gear with weight loss.

Until next time on my life change update, have a good June! Next month I will run in the Fiesta 5K which I am looking forward to. I hope to be able to post some pictures from that race.