One Year in June we Remember Sidney our Family Cat 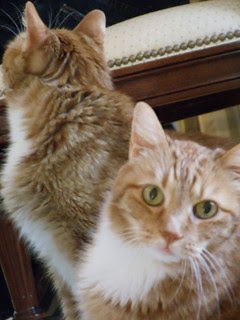 It is hard to believe that one year ago on June 7 we put down our kitty Sidney. It seems like just yesterday that I met him for the first time (2001). The first time that I figured out exactly how cool cats can be. By the time I met Sidney, he was already an adult cat. Set in his ways and use to his owner Carrie.

We became good friends and I enjoyed seeing him each day once Carrie and I were married. Shortly after we put Sidney down, I wrote a post about my memories.... Sidney put to rest...

It is hard to beleive that a year has passed and we celebrate our cats existence in our family. What a great part of the family he was in our lives.

We were so miserable for so long after we down Sidney that I was not sure we would ever get over not having him in our family. Both Carrie and I would start crying at the slightest memory of him. There was no way I thought we could get past not having him in our lives let alone ever having another pet. We knew there was no way Sidney could ever be replaced and did not want to try and replace him. We figured we would not get another pet for a while.

We put Sidney down on Tuesday, June 7... Little did we know that two days prior on June 5, 2012 a Japanese Chin had been born that would become a part of our family.