What a Snow Day!

I went to bed Tuesday evening to snow falling and the chance for a lot of it to fall through the evening hours. I awoke Wednesday morning to the sound of NPR saying that all area school were closed, University of Kansas was closed, and various other places were either closed or canceled. Still no word about Washburn from NPR at 6:45. I called the main number for Washburn to check announcements and nothing. I started getting up and about to get ready for work. At 7 a.m. came the announcement that Washburn University was closed for the day because of snow. I went ahead and got ready for the day. Carrie checked her work (Payless) to see if they were closed and no such luck. She was ready for work and left around 7:15 or 7:20.

I went downstairs to wish her a safe day and turned on the computer. I decided to do some work (e-mail and tickets). I looked out the window and saw all of my neighbors out shuffling their drives, sidewalks, etc. It was still snowing and had been doing so all night. Carrie sent me a e-mail message around 8:10 to ask a question and I knew she had gotten to work ok. I called her and she said the roads were not bad, but they were not great either.

I finished doing work and checking the Internet before around 11 a.m. I decided to go out and do the driveway. I first had to search for my snow boots and then started the driveway. By 11 am the snow had stopped and the sun was out. It took me about an hour to the do the driveway and walks before I went back inside. Carrie and I had talked twice during the morning and a few times via e-mail. I spoke to her last at 10:45 or so when she was heading out to get her nails done. 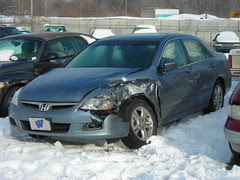 After finishing the drive and walks I came inside to warm up and get something ready for lunch. I called Javier to see how his trip went to Kansas City and he was on his way back. I finished talking to Javier and got a call at 12:20 p.m. from Carrie. She did not sound like her usual self and all she said was "I was in a wreck. I am OK, but my head and right knee hurt. A abmulance is headed to the scene and I will call you later." My heart sank and I asked her where she was at. She told me on I-70 & California. I told her I would come out there and she told me I would not be able to get to her because of the traffic. She told me again she would call me with more information. 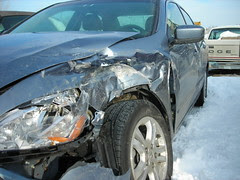 An eternity seemed to pass. Meanwhile, I called around to let various people know. While I was waiting for Carrie to call me back. After calling a few people I tried calling Carrie. No answer. I waited a while longer and called our insurance company to let them know what had happened. Still no word from Carrie. I tried her again and again it went to voicemail. Finally at 12:50 p.m. my phone rang and it was Carrie. She told me the ambulance was there and they were taking her to St. Francis. I told her I would be leaving the house and see her there.

I had brushed off my car while I was doing the driveway, so it was ready to go. I got my things and headed to St. Francis. I was trying not to rush so that I would not end up in a wreck myself. I came down 6th street heading East and I think I saw them taking Carrie out of the ambulance. I asked at the front counter if she had arrived and they did not yet have a record of her arriving. They directed me through a set of doors where she would be coming into the emergency room.

I stood around for a few minutes waiting to talk to the reception desk as they were busy with some other people. About that time a woman came walking to the counter asking if they knew a "Brenda" that worked there. The lady said that the woman from room #3 was asking for "Brenda". No one knw a "Brenda" in St. Francis emergency room. I knew that was Carrie and I walked around the corner to see her in the bed.

She looked fine except for a scrape next to her left eye. The nurse finished her work and Carrie started crying. The nurse ("Kim" I think) told me that Carrie had done just as she was instructed to do... not to cry until she was done with what the nurse had to do. She said had done good! Carrie started crying and she started talking about what had happened. Carrie was headed East bound on I-70 between Adams and California. A line of vehicles were all using the slow lane (right lane) because there was still a lot of snow on the fast lane. She was going 30 - 35 mph as well as everyone else. There was a car in front of her and apparently a semi in back of her. the car in front slowed and Carrie did too. When Carrie did her breaks the car slid to the right, then to the left, and then did a 360 before coming to a stop. Carrie said she was calm during the whole thing until she looked out her drivers side window to see the grill of a semi coming directly at her. There was nothing she could do, but she recalls throwing her hands up as if to stop it. The side airbags as well as the drivers seat air bag all went off. We think that she got the cut from the side air bag opening to protect her and getting caught her sunglasses caught between the bag and her face. The glasses broke in two. In the hospital she was upset about her sunglasses because they were her favorite pair.

Two guys found Carrie in her chair half laying over on the right passenger side. One asked her if she had passed out and we think that she probably did. As soon as she was able to do so she found her cell phone and called me to let me know she had been in a wreck. By the time I spoke to her the second time she said the fire department was there and the ambulance was getting ready to take her to St. Francis.

After speaking to her I got in my car and drove to see her. I called and left a message for Brenda who was at work. I was almost to the hospital when my phone rang and it was Brenda. Or course she thought it was social call, but I told her Carrie had been in a wreck and was being taken to St. Francis. Brenda said she would watch for Carrie's arrival. I got there shortly after that to find Carrie.

Anyway, I am starting to repeat myself. It was a very interesting day and one we will not soon forget. A day that I hope we, or anyone else, ever has to go through. It was scary for Carrie and for me. Carrie is doing well, but she is sore from the wreck. She is taking pain medication and will hopefully go back to work soon.

Thank you all for your thoughts and prayers during this interesting time on what was a snow day for me. Definitely not a snow day that I will ever forget!

Be safe and watch for more little less serious posts in the future...
Email ThisBlogThis!Share to TwitterShare to FacebookShare to Pinterest
Labels: 2007, Carrie, Crazy, Honda Accord, Remember, Semi, Story, Wreck