Wow! What a show! Hamilton Loomis put on a great show! He went on stage around 8:45 and played three sets. We left the place around 1:30 in the morning after he finished his last set. It was a great time! 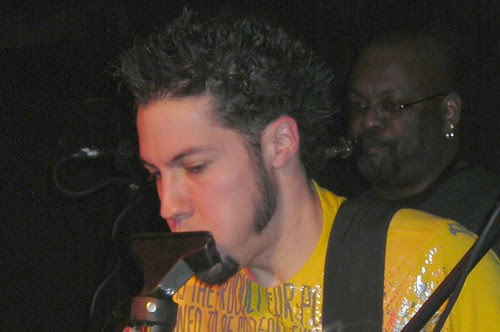 Hamilton and his band had great sound as well as a good feel with the audience. At one point walking out into the audience standing on the tables and playing his guitar.
If they can get him to the Arkansas Blues and Heritage Festival in October, I think he would be a great fit. A Friday act would work out great for him and the festival. His interaction with the crowd was like a seasoned veteran of the stage. He wore a wireless mic and would definitely be a "walker" at the festival. 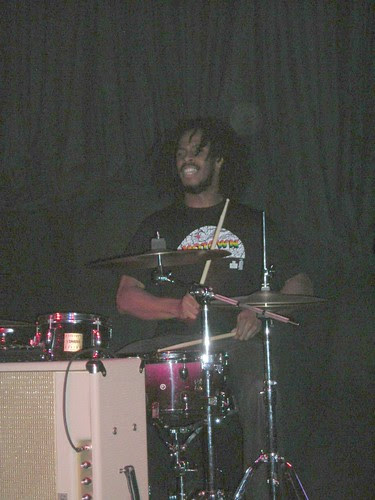 He played three sets and everyone enjoyed the performance. The drummer was really good too! Fun to watch and definitely did a great job on the drums.
The band was recommended by Uncle Tommy from Texas and I know why he likes Hamilton Loomis so much... Uncle Tommy use to be a drummer and this drummer was good!
Going back to the "walker" comment. This is one of my favorite parts about working the festival. I have worked the festival the past two years and typically there are at least a couple of the musicians than like to walk through the crowd. Thus, I get to guide them through the crowd making sure that they get through safely and then return them back to the stage. I can definitely see Hamilton wanting to walk the crowd.

I would highly recommend if you get the chance to check out Hamilton Loomis. Great songs, great performer, and a great time!
Today I find myself relaxing watching movie, playing on the Internet, and trying to get over a hang over from the night before. To check out all pictures from Hamilton Loomis, check out my Flickr page.
Email ThisBlogThis!Share to TwitterShare to FacebookShare to Pinterest
Labels: Arkansas, Blues, Festival, Hamilton Loomis, Kansas, Topeka