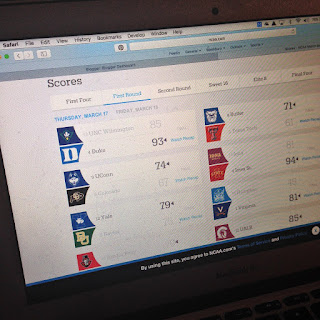 The first day of the first round of the NCAA tournament is done. What a day of basketball! There were upsets and there was at least one overtime game. Fun day of basketball Thursday for the start of March Madness.

For the ESPN Tournament Challenge (see March Madness 2016 Tournament Challenge Starts Tonight) it did not take long for many of us to have busted brackets. Out of 13 million brackets, there are as of this morning only 25,704 perfect brackets or 0.2% of the brackets that remain perfect according to ESPN Stats &  Info Twitter account.

With some of the standard upsets we come to expect in March with nine seeds beating eight seeds, but then there were also a few twelve seeds beating five seeds. There were actually two of those that happened with upsets by Yale over Baylor and then University of Arkansas Little Rock over Purdue. There was also the expected with Gonzaga beating Seton Hall which was a eleven seed beating a six seed. Expected each year to happen from Gonzaga.

All three one seeds that played yesterday (Virginia, Kansas, and North Carolina) won and moved on to the next day. The only other one seed, Oregon, plays today against Holy Cross. Unless something crazy happens, all one seeds will make it past the first round with a Oregon win today.

Looking toward day two and it will be another great day of watching basketball. Follow live scores or watch online via NCAA March Madness Live. Curious to see how Big 12 teams do today after two lost yesterday.  Five Big 12 teams remain out of seven that made it to the tournament.

Enjoy the day and enjoy the "March" Madness!